Do you know how to properly prepare and defend yourself, family and home from a wildfire?

Every year wildfires burn thousands of homes leaving homeowners devastated and wondering where and how to start rebuilding their lives.  Often times, wildfires begin unnoticed.  They spread quickly, leaving little time to pack and evacuate.

Furthermore, wildfire threats to lives and property increase as more people build homes, operate business and recreate in areas where wildlands border more urban areas.  Over the past few decades, more people are moving into an area referred to as the Wildland

Urban Interface (WUI). The WUI's are where man-made improvements, such as homes, are built close to, or within, natural terrain and flammable vegetation with high potential for wildland fire.  While residents in these areas enjoy the beauty of the environment around them, they also face the very real danger of wildfires.

In addition to the growth of people migrating to the WUI, frequent severe drought, record heat and insect infestations have contributed to higher fire danger in Colorado.  Are you at risk?  Check the Colorado Wildfire Risk Assessment Portal.  Despite the risk, everyone can take steps to prepare for wildfires.  Explore the information below to learn more about what you can do.

Preparing a Safety Zone for Your Home

Create a 30 to 100 foot safety zone around your home. Within this area, you can take steps to reduce potential exposure to flames and radiant heat. Homes built in pine forests should have a minimum safety zone of 100 feet. If your home sits on a steep slope, standard protective measures may not be enough – contact your local fire department or forestry office for specific information.

Within the zone, you will want to take the following steps:

After a Wildfire
More Wildfire Information

The Black Forest fire started on June 11, 2013 and would continue to burn until June 21, ultimately growing to 14,280 acres.  Two deaths were confirmed on June 13, 2013.  The Black Forest fire was the single most destructive fire in Colorado History in terms of properties lost. Estimated insured losses totaled $292.8 million resulting from approximately 3,630 homeowner and auto insurance claims filed so far. El Paso County reports 486 structures burned in the blaze.This was the second time in less than a year that a fire in El Paso County set such a record, the first being the Waldo Canyon fire. 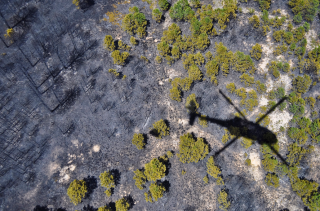