​Did you know Colorado accounts for one-third of all avalanche deaths in the U.S. since 1950?

The ability to participate in a large variety of winter sports is one of the best perks of living in Colorado. With winter sports, however, come risks, especially in the backcountry!

Approximately 2,300 avalanches are reported to the Colorado Avalanche Information Center (CAIC) every season, and as many as ten times more go unreported. Avalanches occur in the high mountains of Colorado as the result of snow accumulating on steep slopes.  If the snowpack becomes unstable, it can suddenly release and rapidly descends downslope.  Avalanches can exert forces great enough to destroy structures and uproot or snap off large trees.

What causes an avalanche?  The addition of weight to the snowpack can trigger an avalanche. The weight can come from snowfall, drifting snow, or a person snowmobiling, snowboarding, skiing, or hiking.  More than 75 percent of the avalanche fatalities in Colorado are caused by people recreating in the backcountry. If you are an outdoor enthusiast, explore the information below to learn more about how to stay safe in the backcountry.  VIDEO: Avalanche Hazards in Colorado from the Colorado Geological Survey

A group of six backcountry enthusiasts taking part in the Rocky Mountain High Backcountry Gathering, an event organized to promote backcountry snowboarding and avalanche safety, met at the Loveland Ski Area on April 20, 2013. The group went towards Loveland Pass intending to do a short tour. They decided to spread out with approximately 50 feet between people as they headed for a small stand of trees. The first two members in the group had reached the small stand of trees, with the other four members close behind when they felt a large collapse. It took several seconds for the crack to spread uphill and release the deep slab. Tragically, five of the six were killed in the avalanche, making it Colorado's deadliest avalanche in 50 years. 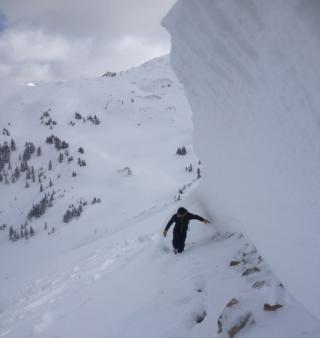 Cover, banner, and within text photos courtesy of the Colorado Avalanche Information Center